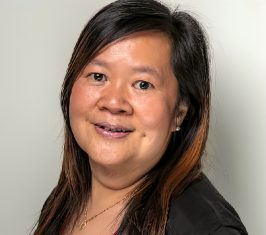 Betsy Lee-Fong is the Director of Global Creative Services at IBIS.  She manages all aspects of video and audio production for interactive theater, micro learnings and eLearning.

Betsy had a wonderfully successful career as an Executive of Production at Disney Channels Worldwide managing Animations, Sitcoms, Concerts, Reality Shows and Specials from development to final delivery.  She also travelled and worked throughout South East Asia launching MTV Asia for MTV Networks.

She moved back to Philadelphia in 2015 to be closer to her family and pursue a passion to give back to her community and advocating for Diversity, Equity and Inclusion for the Greater Philadelphia Asian American Business Community where she spent the last 5 years working in the non-profit sector as the Director, Programs and Operations.

Betsy was appointed as one of the Pennsylvania Governor’s Advisory Commission on Asian Pacific American Affair in November 2019 and is also a Red Cross Diversity & Inclusion Committee Member for the American Red Cross Southeastern Pennsylvania Region.