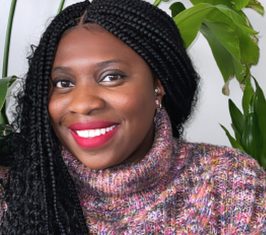 Abi Adamson was recently quoted in the New York Times as one of the “Stars of Black LinkedIn” and is often described as the future of diversity, equity and inclusion (DEI) thought leaders. As a consultant, Abi has a proven track record of delivering positive global DEI culture strategies and facilitating DEI sessions for some of the world’s best-known companies, including, Spotify, Slack, TotallyMoney and Papier.

Abi focuses on being an advocate for equity in the workplace and helping people overcome the silver elephant in the room when it comes to having uncomfortable conversations about diversity, specifically around race, as well as other intersectional identities. Abi has recently been featured discussing DEI issues across multiple mainstream media including, The Metro, D&I Leaders, Training Journal, the Chartered Management Institute, and HR Zone, to name but a few.

To help develop her understanding of the complexities of race and inclusion, she is currently studying for an MA in Race, Media & Social Justice at Goldsmiths College at the University in London.