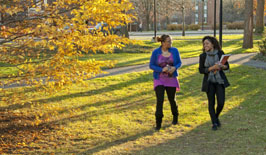 It’s back to school season. Does that mean back to bias, too?

The Unconscious Bias lurking in all of our brains can easily be triggered by new faces, and the rapid-fire assumptions we inevitably make about the people around us is not helped by the mad rush of activity on campus, which feed these challenging situations.

These challenges are felt keenly by students. By faculty. By staff.

By everyone in the academic community, in other words.

When biases kick into high gear, it helps to slow down and notice what’s happening. Take a moment to make the unconscious conscious. What, exactly, are the thoughts running through our heads when we react to a particular person or situation? It helps to follow those thoughts with curiosity—to spell out just what they are, without judgment. For instance, does overweight mean unmotivated and unsuccessful? Are two people with different skin colors always going to have fundamentally different perspectives? Does having an uncomfortable disagreement with a peer mean that the relationship is not valuable?

Unconscious Bias functions to make sense of the world around us in as rapid-fire a way as possible—without waiting for answers. Our brains evolved to react, but unless we need to run away, being in a reactive mode doesn’t serve us well. Slowing down and asking questions allows us to take the first step in examining the impulses, assumptions and conclusions our brains generate.

Entire academic communities are building on these first steps toward assumption curiosity by taking these steps together. Slowing down, asking questions, and facilitating real dialogue.

On some campuses, it’s the students who are taking Diversity & Inclusion into their own hands. Using social media, affinity groups, and good old-fashioned grassroots initiative, they are coming together, with administrator support, to examine—and learn to manage—their own biases.

The #PowerofWe movement at Florida State University harnesses the power of disparate approaches to diversity and capitalizes on difference instead of allowing it to be an obstacle. The campaign includes chalkboards throughout campus, periodic forums and a regularly scheduled inclusive lunch in addition to the hashtag; each initiative presents a discrete medium for dialogue about what diversity means to the community.

It’s not just the students who are fighting to build diversity awareness. Campus administrations are hard at work, too.  Whether they are training students on micro-aggression, rolling out diversity programs for staff and faculty, or hiring Chief Diversity Officers, colleges and universities are working to make unconscious bias much more conscious –and manageable.

Seeking greater gender equity, Georgia Tech has committed to two years of progress across all eleven action steps in four discrete impact areas: Hiring, Promotion and Tenure, Professional and Leadership Development, Leadership Appointments, and Recognition and Increased Visibility. At the top of their list? Workshops on bias for hiring managers and faculty promotion and tenure committees.

At IBIS Consulting, we developed a framework for becoming more intentional about reactivity and unintentional discrimination by identifying three common forms of bias: Attention, Affinity, and Association.

Using this framework to recognize the chatter in our brains—and the ensuing consequences of our actions based on that chatter—can have a very real impact on the relationships we build. Most fundamentally, it helps us resist the leap to a conclusion.

The hard work underway across the broader higher education field will undoubtedly have positive consequences for future graduates and the communities in which they live and work, not to mention those who build innovative programming that propels our colleges and universities into more a inclusive and conscious future.