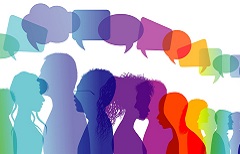 The Power of Dialogue

One relationship taught me a lot about the power of dialogue–especially when it comes to race.

Although I walk into a room as Enin, I also do so as a tall, bald, Black male. I have been taught that my social identity comes with a set of consequences. So, when I first met Dr. David Wedaman, a brilliant white man, I felt a bit guarded, as if I had something to prove.

I first met David three years ago. At the time, we were being tasked with conducting an organizational assessment and would be working together for the next several months. After a brief introduction, the conversation shifted to us laying out a strategy for our workplan.

As a Black man, the shift in focus was difficult for me to make. My energy felt splintered. It had less to do with anything David said or did (he was always very pleasant), but rather, an internal awareness that began to surface for me.

As we worked on the project, I found myself becoming increasingly hyper-aware of my Blackness. I often wondered what assumptions, or preconceived notions (if any), David might have of me. To what degree, was my racial identity a factor for him? Did David, an academic by admission, view me as competent enough to work with him?

Despite these feelings, David and I established a genuine partnership and stayed in touch after the project ended. Over the course of the next year or so, we exchanged texts and calls. Before long, we collaborated on another project.

The concerns that I’d had previously…just weren’t there.

The difference this time around was that we had established the kind of trust that lends itself to creating spaces for open and honest dialogue.

Realizing that our relationship had evolved, we used this opportunity to unpack our shared experiences. I was able to share my thoughts and perspective on the early stages of our rapport in a very real, unfiltered way.

In response, David said, “When I think back to our first meeting, I’m mostly just struck by how little I wondered about what was going on for you. There was a huge discrepancy between what you were carrying and what I was carrying. I gave myself some kind of privilege-related permission to focus on the “work” and not really care about what you were feeling or thinking. I was definitely not asking myself “what’s it like to be Enin in this relationship?” I might not have even been asking myself “what’s it like to be me in this relationship?”

David’s narrative provides insight into how we can bridge the gaps created by racially-reinforced social distance.

Dr. Enin Rudel, Senior Consultant with IBIS, is an organizational psychologist by training and has worked with Dr. David Wedaman in organizational development. They are frequent collaborators in the space of DEI & social justice.