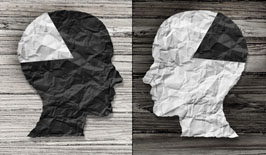 Imagine you’re sitting in the dentist’s chair, getting your teeth cleaned. There’s nothing new here: you’re getting the same procedure, with same hygienist, that you’ve gotten every six months for the past fifteen years. Is it possible that 30 times, you’ve sat down in this same chair and this same hygienist has cleaned your teeth? Yes. The context of your relationship with her is apolitical and task-oriented, just like with so many others in your life, such as the mail carrier, the person behind the deli counter, or even your neighbor. The hygienist makes idle small talk by asking about your employer. Speaking through the metal tools in your mouth, you mention that you work for a diversity & inclusion firm.

Then she says something that gives you an unpleasant jolt. “I’m all for diversity, but where are the normal Americans?” she asks. “I was in a bank recently and their advertisements in the lobby showed people who looked homeless, who dressed dirty and who just…looked dirty. There was even someone in the ad dressed up in a burqa.”

This happened to Mike. He’s our project coordinator at IBIS, and has no shortage of skills interacting with the general public; he was a school teacher for 5 years, and then worked in higher education administration for 17 years.

Responding clearly in the moment can be such a challenge, especially when we aren’t ready to abandon the utility of that relationship. Maybe we know we should say that we disagree, and that we’re uncomfortable with exclusionary statements, but it’s hard. Being prepared with a statement such as “I’m actually uncomfortable with what you’re saying,” or “I want to let you know that I don’t share that perspective” can help make this easier. And it takes practice.

In Mike’s case, he listened to these words, felt a rush of anger and frustration that led him to a moment of having no idea what to say, and so he replied, “I think we should talk about something else.”

She moved on. But Mike didn’t. He got his teeth cleaned in relative silence, and was still thinking about this moment days later, when he brought it up at our staff meeting. As a group, we reflected on his very relatable experience, in the context of race. Since Mike is white, and the hygienist is white, we determined that she likely wouldn’t have expressed this sentiment in these words if his skin was black or brown.

Since Mike never took action to express his disgust directly with her, he still feels angry at himself for not confronting it in the moment. Have you ever felt that way?

“I know that people think how they think, but throughout my life I haven’t engaged in conversation with them,” Mike explains. “Facebook algorithms ensure that we surround ourselves with people who are like-minded. Has it always been this way? Is it just amplified by social media? I feel like we’re on an irreversible course in this country. We’ve had Republicans in power before and it was never like this. Race has become more blatantly politicized. Since when is diversity a political topic?”

“I feel yucky about it,” says Mike, “because I haven’t done anything about it yet.”

“We need a strong leader,” he continues, “and a sea change for a big course reversal.”

But in the meantime, we can respond in individual situations in which race factors in the expression of exclusion and discrimination. In order to respond, we need to be ready with the right words, because they can be very hard to find in the moment.

To honor Mike’s desire for real discourse that holds the potential to guide the speaker to a different way of thinking, take the time to concisely explain your perspective.

Alert the speaker that many others may also not agree with her.

Finally, give that person the opportunity to respond, but know that you are empowered to inform the speaker’s employer. In this situation, the dentist has a right to know why his or her loyal patient is walking out of the office feeling upset.

When everyday situations result in talk that is racist, homophobic, bullying, or discriminatory in other ways, we listeners need to do more than listen. We must speak up, when it’s safe for us to do so, even if it means returning to the same person weeks or months later. Silence, over time, is complicit.

Writer Cedar Pruitt is a senior diversity consultant at IBIS, specializing in inclusive leadership and culture at organizations ranging from start-up companies to competitive universities.