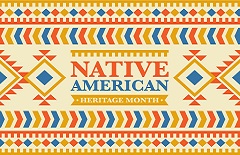 For those who wish to honor the month but are not of that heritage, we recommend reading native authors, learning about Native history, and building an awareness of the influence of these cultures on all that surrounds us, from the origins of the paths we take to those descendants we know but whose history we may not have fully considered.

We especially recommend reading the book There There by Tommy Orange.

This month sparks a hopeful question: What can we learn from the way our thinking and talking about Native cultures has changed and evolved over time? Can those lessons be applied to the elevation of other people in marginalized positions? As a nation in conversation about inclusion, the United States has begun to take the following steps:

Though I happen not to live in one of those states, I can attest that the next generation is being given greater perspective than in the past when it comes to marginalized voices. My son came home from second grade, somberly declaring that they’d learned about Columbus; when I ventured to ask what he’d learned, he explained that their teacher taught them that this explorer had enslaved and abused native people. Those of us attending public school three or four decades ago were taught a very different perspective on Columbus – and the experience of the native population was not portrayed sympathetically in the classroom.  (Harvard Graduate School of Education: The Columbus Day Problem)

Today, the U.S. Government officially confers federal recognition to 573 Native American and Alaskan Native tribes in the United States.  That represents a high level of diversity among those tribes that is not widely known or celebrated, but it is a powerful thing to understand when we talk about representation and inclusion on a national level. (Federal Archives: Oregon Treaty)

Though true participation in government had been long suppressed, efforts to support the voting rights of the members of those communities are underway in the form of bills like the Native American Voting Act, currently in Congress. (ASU: Little Known Snyder Act)

In 2018, Democrats Sharice Davids of Kansas and Deb Haaland of New Mexico made history when they became the first Native American women ever elected to Congress. In her victory speech, Haaland said: “Seventy years ago, Native Americans right here in New Mexico couldn’t vote,” she said. “I want to tell everyone in this room, people who have been under attack who deserve never to be erased: I see you, I’m listening.” (Washington Post: Two Native American Women Are Headed to Congress)

3. Understanding That Much More Must Be Done

While progress is slowly being made toward the inclusion of Native populations, there remains a vast amount of work to be done. As an example, to ensure that voices are fully heard, languages need more attention; tribal languages have long been at risk of extinction. We can be inspired by, and replicate, current work to reverse that trend. (NPR: Oklahoma Charter School)

In our work, we’ve seen that Native employees often find their workplace experience reflected in the larger pattern of cultural erasure. These employees strive to succeed in the absence of many of the socially-constructed privileges given to their white peers, and yet also without a clear identity. We haven’t seen much prioritization of this group and their pain points, which is likely a result of lower numbers of representation. While organizations strive to include all employees, we’ve found that an “umbrella approach” to inclusion doesn’t work. People, including Human Resources and company leaders, lack awareness of the issues, opportunities and challenges surrounding this demographic group, and lack a targeted strategy to really engage their voice in the workforce. We encourage focus and attention on this group.

Recognizing the whole person is just part of true inclusion—the next step is to create the space for the ideas and influence of that person’s experiences and culture to truly play a part in forward progress. But though we’re not there, we can see that change can happen, and that each one of us, in our own way, can participate in it.

Cedar Pruitt is a Senior Consultant at IBIS specializing in leadership and culture that allows everyone to thrive, whether it’s at an innovative start-up, competitive university, mid-size financial firm, or something completely different.

Shilpa Pherwani, the principal of IBIS and a leading expert in diversity and inclusion, has been guiding global organizations for over 16 years on leveraging diversity as a business advantage. An organizational psychologist by training, she partners with organizations to effect sustainable organizational change by conducting cultural assessments, developing comprehensive strategic diversity action plans, and designing compelling and interactive classroom-based and online training.