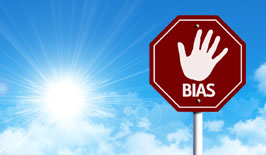 Even on a team that works closely together, no one is able to have a complete understanding of their colleagues. Most people only see certain aspects of others, and not the entire person. Still, most people imagine that they do know one another, especially since many people spend a large amount of time together in the workplace. Understanding more about unconscious bias and learning how to help create an inclusive culture will help shed light on how this works. In the workplace, when our unquestioned beliefs and assumptions bump up against somebody else’s beliefs, that can lead to misunderstandings, confusion, breakdowns in communication, and worse. There are three kinds of unconscious bias that can really get in the way:

First, the subconscious mind decides what is noticed without a person’s realization. This is referred to as Attention Bias. The conscious mind is not even aware that bias has taken place. Attention Bias can lead people to make assumptions about others, such as who they are and what they may be capable of, without recognizing that in all likelihood, the entire story may not be known.

For example, a colleague may arrive late to work on a routine basis. The unconscious mind may notice this and make conclusions about this person; perhaps with regard to their reliability, integrity, or even respect for others. Other important information is not available to the observer, however, and any conclusions made may be inaccurate. Perhaps the colleague is dealing with an ill family member, or there have been changes to a commute, or they have been working additional hours while away from the office. In the unconscious mind, a person’s own standard of how and when someone should work may already exist without comprehending that there may be more to a given situation.

Another common unconscious bias is related to Affinity Bias. Just as it is human nature (and unconscious bias) to be drawn to people who are similar in some way, many people are more critical of and less drawn towards people who seem different from themselves.

Take, for example, a contributor to a team who may like to listen carefully and have a firm grasp of all the available information before stating an opinion. What if, however, the team’s leader prefers to think through ideas by exploring them out loud? Human beings often see others’ behaviors and automatically interpret and attach meaning to them. What happens when questions are asked of the team member and he or she is not vocal? Others might assume this person to be uncooperative, perhaps not respectful, or not a good listener. But what if the quiet team member listens to the vocal project manager and feels this person’s ideas are not congruent with their own? Perhaps the team member will view the leader as irresponsible or even unrealistic; maybe even come to the conclusion that the leader should not be in a leadership role.

Both team leader and team player see each other through their unconscious biases about the way the world should work: Beliefs which were developed early on in life and may not be true at all. Each person unknowingly sees him or herself as the standard for how to operate, rather than recognizing that they each work differently, and that if they work together, the results could be grounded in practicality and be innovative.

Another type of unconscious bias is Association Bias. We have hidden assumptions in our subconscious minds in which we associate people with certain categories- such as, people usually associate males with math and science, and females with the liberal arts. Even in countries in which women and men have equal career development opportunities and income, most people associate women with home and family and men with workplace. That unconscious association bias dominates even in places where men and women consciously see themselves as equal. Association Bias is one of the most prevalent kinds of unconscious bias, and creates some of the biggest challenges to an inclusive workplace and fair and equitable career advancement.

Biases associated with cultural differences can also bring challenges and lead to misunderstandings that negatively impact an organization’s bottom line. People and cultures can vary greatly across multiple dimensions in the workplace. For example, employees, managers, and indeed an organization’s clients may have completely different attitudes regarding things such as communication style, orientation to hierarchy and status, and how they feel about tasks vs. relationships.

Here are some examples of how team members may have different orientations towards these dimensions. Understanding how cultures and groups differ on these dimensions is one way to mitigate biases associated with working with people across different cultural backgrounds. 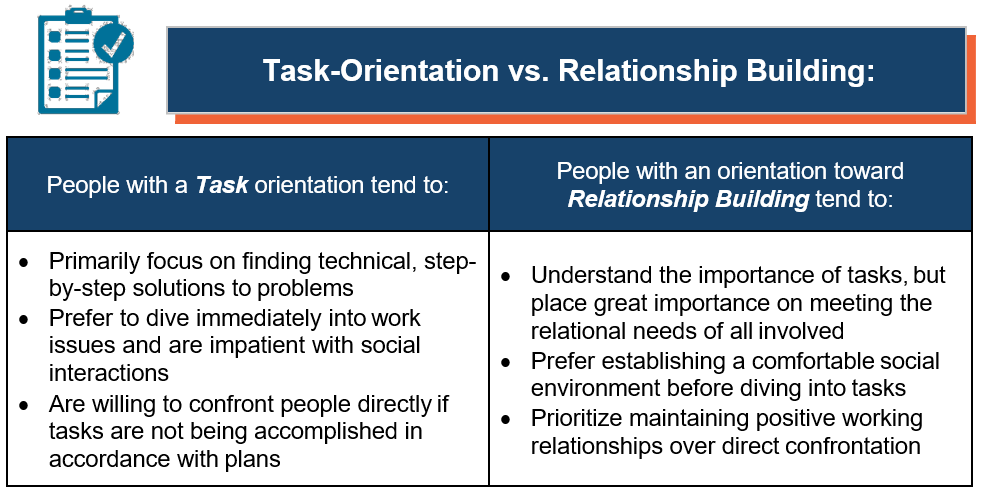 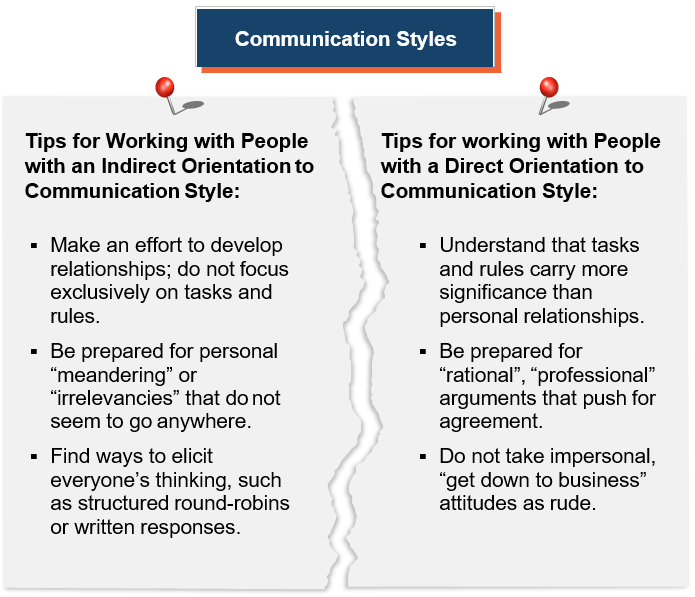 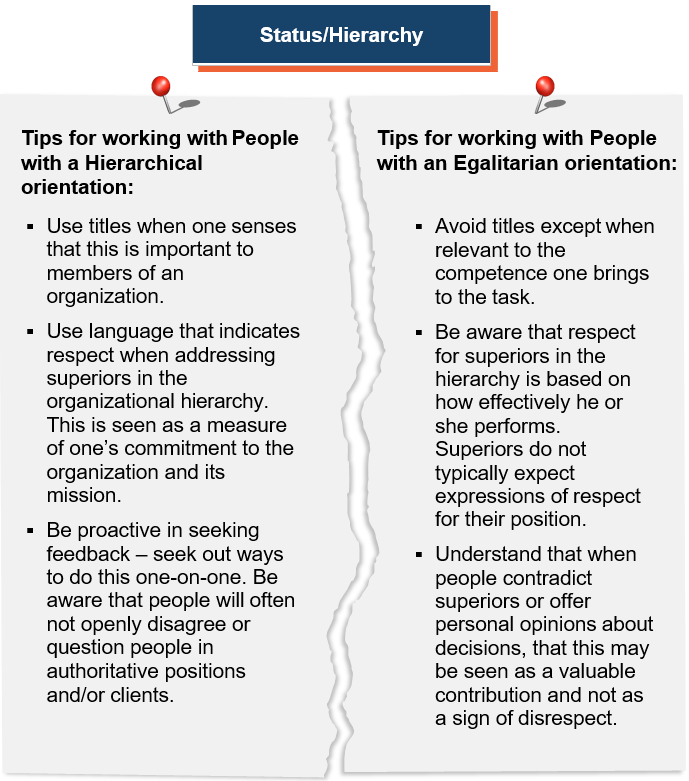 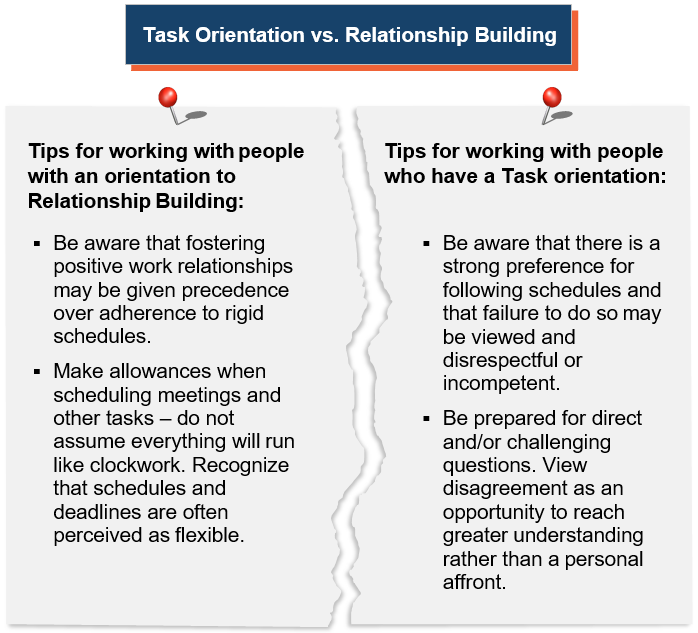 When an organization’s workplace is not inclusive, it may not be attracting the best people, and could even be losing some of the good people who are already there. This could also indicate that an organization may not have the best representation in its workforce to know what its clients and customers actually want and be able to connect with them. This, in turn, means that it may not be able to keep up with the competition in terms of quality and quantity of product and services. Managing cultural differences to build inclusive and respectful workplaces can keep quality and morale high, as well as help an organization’s workforce be more effective and productive.