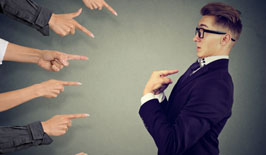 But I’m Not the Problem…

I recently overheard a statement that made me pause: “Men have it a lot harder in society than women do.”

Any room full of people will have a reaction to hearing that, but we happened to be in a workshop on sexual harassment. The room was so crowded with students and faculty that the only available seat I had was on a windowsill.

Midway through the workshop, the presenter asked if anyone was feeling uncomfortable. A man raised his hand. “I feel like society has painted a view of men as perpetrators. I would never sexually harass a woman, so why am I being personally blamed?”

Pause. Just a quick reminder that men can also be victims and sexual harassment is not about sex, but about power. Right, carrying on.

The question he asked comes up repeatedly. It comes up in discussions in the news, in the classroom, in conversations with my friends. Sometimes the context is race, or gender, or sexuality, but it’s always along the lines of: But I’m not the problem, so why am I being blamed?

And really, is it that ridiculous of a question? If you don’t feel like you’ve done anything wrong, is it so strange to question why you’re being made to feel guilty?

So, there I was, perched on a windowsill barely visible to the majority of attendees, opting to respond to this man, and frankly, to all of the other individuals in the room. And now, I’m sharing my response and reflection with you.

It’s easy to be on the defense when these sensitive subjects arise; I get it. It’s easy to throw your hands up and shout to the heavens that you aren’t racist or sexist or all the others “ists” out there. But we all have to realize that our mental models form our lens to the world.

Yes, YOU would never intentionally do something to hurt someone or put someone at a disadvantage, and that’s great!

But – (and you knew there was a ‘but’ coming) just because we would never intentionally do something to hurt another individual doesn’t mean we’re immune to the unconscious biases that everyone exhibits and acts upon. It is our responsibility as community members to consider the systemic barriers in place that stack the odds against marginalized communities and attach privilege to the majority demographic.

Unfortunately, our defensiveness on these issues leads us to forget that it’s not always about us and our need to justify our own actions, but rather, the collective output from individuals and the system in which we operate.

So, what can we do besides shouting to the heavens that we aren’t a terrible person? Rather than saying, “I would never do that,” I propose it would be more productive to say, “I recognize my role in this and how my gender, race, sexuality, etc. has historically contributed to this problem, and now I get to choose how I show up and participate.”

We get a choice in how we show up, we get to change the dynamic and play a role in the progress. Rather than opting out because we don’t think we are part of the problem, we can instead opt in and be part of the solution.

We can simply say, “I hear you, I’m listening.”

I’m still working on how to get it all just right.

I’ll admit that the later breakout session following the workshop, when this man and I were grouped together, was challenging for me.

I may have shaken my head at him and rolled my eyes when he professed the only reason women don’t advance in their careers is because we all choose to have families instead, among other lofty generalizations. But surprisingly, we somehow kept the conversation going, we somehow were able to have a genuine laugh here and there, and at the very least, we both planted a seed to think critically about our conversation.

The truth of the matter is, he showed up to the workshop to learn and ready to listen. He was present and engaged and willing to voice his opinion. We can all recognize that the “everyone thinks like me” belief system doesn’t really work, but it takes time to arrive there emotionally.

If we shut people down, without meeting them where they are, they aren’t going to be interested in being brought into our corner. And when it comes to sexual harassment, we do need men on board to make social progress.

We need to actively engage with dissenting voices, especially when they say, “…but not all men.”

Call In, Don’t Call Out

In a divisive time, people must be called in, not called out. Each person who opts in and chooses to participate, positively, has a chance to be a catalyst for change. By focusing on the issue rather than our need to prove our innocence, we can make this world a better, more inclusive place.

So, how will you show up?

Writer Alex Suggs is the Research and Consulting Coordinator at IBIS, energized by courageous conversations and engaging in a human-centered approach to consulting, with empathy as a key aspect in approaching challenges.