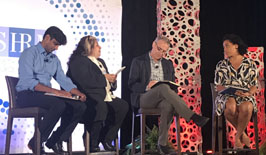 “Your name is Aysha?”

So begins Aisha’s interview with Jack, the hiring manager. She’s excited; the job seems like a great match for her skill set, and she’s eager to work for this company. “When I read the job posting, I thought it was written for me!” she says to Jack. Two minutes later, Jack mispronounces her name – again. With a smile on her face and in her voice, Aisha corrects him. Then he does it again, and yet again Aisha corrects him. Moments later, Jack glances at his cell phone; he’s so sorry to have to cut their interview short, he says – he just got an urgent text about a work crisis that needs to be addressed immediately. As Jack heads toward the door, Aisha reaches out to shake his hand and thank him for inviting her to interview. “I’d really like to work with you,” she says. “Well, thanks for coming in,” replies Jack, and the interview is over.

“So,” says the facilitator, “what would you like to ask Aisha and Jack about that interaction?”

The interview described above isn’t real – it’s a scene, being performed by professional actors as part of our Interactive Theater training modality. And the questions from the learners come thick and fast:

The actors answer in character, talking about how it felt when the other character said or did something in the scene, and why they themselves made the choices they did. And although everyone in the room knows that what they just saw wasn’t “real”, their reactions are. The learners respond in earnest – relating to the characters, identifying with the situation, connecting with their own feelings. It’s the power of theater- they’re “hooked.”

Assumptions. Unconscious biases. Behavioral expectations. So many issues come up.

Facilitators guide the multi-layered discussions, sometimes turning the questions back to the questioners: “What did you see in the scene that makes you think that?”, “Can you say more about where your question is coming from?”, “How many of you had the same reaction?”

And then, it’s on to application: What might the learners do in similar situations? What adjustments could they make to their thinking, their own behavior, their work processes, or their systems? And which of the Best Practices IBIS shares with the learners might best suit their personal and organizational D&I goals?

The Aisha interview scene is just one of several from our Interactive Theater training modality. We have scenes that deal with stages in the employee life cycle: recruitment and hiring, performance feedback, career development, succession planning; scenes that focus on team dynamics – on site and virtual; scenes that illustrate how microinequities can intrude on casual conversations in the break room. Our scenes also reflect various dimensions of diversity: generational tensions between Millennials and Baby Boomers, unconscious gender bias in work assignments and promotions, stylistic differences between managers, to name just a few. We carefully craft them to capture the shifting complexities and realities of today’s organizations based on our years of observations as D&I experts.

For each client engagement, we “tweak” the settings, dialogue, and characters to ensure that they represent that particular client’s workplace. (Oh, how many times have learners been absolutely certain that our actors must actually be fellow employees!)

Whether your training goal is to help hiring managers recognize and combat the ways unconscious bias may be interfering with the organization’s D&I efforts, to give your HR team tools for influencing the managers they support, to make your executives aware of the impact their choices may have on the morale of the organization, or to equip your individual contributors to be allies and diversity champions, an Interactive Theater approach can give your organization a high-engagement learning experience they will never forget.

Sheree Galpert, IBIS’s Learning and Creativity Director, is a D&I expert with a Masters in Organizational Development as well as a professional actor with credits in regional theaters across the U.S. She is also a veteran of Interactive Theater, and has served as a performer, writer, trainer and facilitator in IT trainings for medical providers, lawyers, colleges and universities, and organizations in sectors as wide-ranging as pharmaceutical research, technology, banking, health care, and manufacturing.