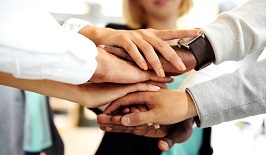 Get Bold, Courageous and Funny in the Workplace

A few years ago, after an informal team dinner at my then-workplace, I found myself in the kitchen scraping food off plates and washing dishes alongside another colleague, who was also a woman of color. As members of the department, we had both attended the dinner. As the evening wrapped up, the department head commented on clean-up and glanced in our direction. As the only two women of color in the room, it appeared that it was expected of us to take on clean-up duties. We weren’t the lowest ranking employees in the room, nor were we members of the catering staff, but we were the only women of color present.

It wasn’t the first time something like this had happened at one of my workplaces, yet every time, I found it to be a tricky situation to navigate. Say yes… and you’ve set an expectation that you’ll clean up in the future. Say no, and risk being told that you’re not a team player, or worse. Is there a way to stand up for yourself and still maintain those positive work relationships?

I thought back to my days as a stand-up comic. Humor allowed me to tackle difficult topics in a deft way. From the stage, I talked about race relations, microaggressions, and inequities in a way that both addressed the topic and allowed people to laugh about our shared foibles. By bringing humor to uncomfortable issues, an opening was created to promote dialogue. Laughter connected me to the audience and connected audience members to one another. It allowed them to let down their guard and to release some of the tension surrounding these issues.

This same concept applies to taking a bold and courageous approach to addressing Diversity & Inclusion in the workplace. To be sure, it can be uncomfortable to broach issues related to race, religion, gender, age, sexual orientation, and other aspects of diversity…anywhere, but maybe especially in the workplace.

What’s okay to say? What’s not okay? How do we know if we’ve crossed the line?

Is there a risk that we communicate less with certain colleagues out of fear of saying the wrong thing?

If so, what does that mean for those colleagues’ career development, or their sense of belonging and inclusion within the organization? The day-to-day experiences of exclusion add up, which means those subtle moments have real impact.

In my work as a D&I Consultant, I notice that clients know to avoid the big “don’ts” in the workplace but get undermined by the more-subtle behaviors. This is when humor can help cultivate a bold and courageous conversation. Diversity & Inclusion training with a comedic element empowers participants to address some of the subtler forms of diversity dynamics in the office. Things like: who does the dishes after the event?

This fall, IBIS Consulting Group will debut a new facilitator-led training program that approaches D&I with a comedic touch. Our facilitators, who have backgrounds in both D&I training and comedy, will guide participants on a humorous, thought-provoking journey into diversity dynamics in the workplace, with a nod to some of the subtler issues that arise. The training is less about learning how to tell a joke – we’ve likely all heard a well-intentioned joke at work that backfired – and more about using humor to open up channels of communication in your workplace.

What if, for example, my workplace had held a more light-hearted training program on the subtler forms of racism and sexism that pop up in the workplace? By having discussed those issues in advance, and even having had a laugh about them with colleagues, it would’ve given me the opening I needed to say no to the task without compromising my work relationships. And it would’ve given colleagues in the room the tools to recognize what was happening, to speak up, and to suggest alternative ideas, such as rotating the housekeeping tasks. Even small shifts in behavior can lead to greater inclusion in the workplace.

Writer Tissa Hami is a senior diversity consultant at IBIS, where she works with clients on creative ideas to advance Diversity & Inclusion in their organizations.