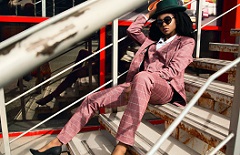 When Fashion is Inclusive, We Come Running – A Spotlight on Suits During Pride Month

For Pride month, IBIS senior consultant Alex Suggs volunteered to share a complicated experience that some of us take for granted: choosing what to wear.

One afternoon when I was five years old, I made a discovery. My best friend Tyler and I were playing dress-up in his room. I could have grabbed any costume in the bucket, but instead I reached for something else in his closet: his suit. The enticing blue pants and matching jacket with a crisp white shirt to go underneath hung from the plastic hanger in front of me with a tie slung over the left shoulder. As I put it on piece by piece, I was overwhelmed with excitement. This made me feel different than putting on the flowery dresses I’d grown accustomed to wearing. This joy, however, was short-lived as his mother walked in soon after and was upset that we were ruining his freshly pressed outfit for church the next morning.

Growing up on the playground was hard as a kid. Girls made fun of me for what I chose to wear, how I styled my hair, and choosing not to wear dresses or chase boys at recess. I remember my favorite first-day-of-school outfit: I wore a white tee shirt, cargo shorts and a fresh pair of Air Jordans—I couldn’t be happier leaving the house, but I faced obstacles once I hopped off the school bus each morning. I vividly remember my answer when asked by a group of girls if I was a boy or a girl: I said I was an “it.” My defense mechanism came from cracking my own set of jokes so nobody else would have the upper hand.

Flash forward more than two decades…to winter 2019. My older sister had announced her engagement, and asked me to be the maid of honor at her wedding. I began to think through what I would wear. What did I usually wear to nice events? My fair share of blazers, of course, and some generic matching pants and jackets. I’d overused my wingtip shoes that were the closest I could find in my size, that resembled the fashion-forward dress shoes commonly seen on male models on my Pinterest board. I’d usually swing back and forth between the mens’ and womens’ side of each store, trying to find some middle ground – the men’s clothing always intrigued me, but the shirts were many times too tight around the hips, too long in the arms, or “too much” or “too far” for someone who wanted to blend in more than stand out. I never found something that made me feel as amazing as I had in my five-year-old moment of glory.

Walking down the aisle, I most certainly wouldn’t wear a dress—but how was I supposed to face a venue full of people in anything else while standing with my sister and her bridesmaids, all in dresses, and looking more like I belonged with the suit-wearing groom and his friends? All eyes were supposed to be on my sister, and yet I had the sinking feeling that at some point, all eyes would unfortunately be on me.

As a kid, I might have shied away and thrown on the dress to be complicit in the gender norms I was operating within. But as a confident and assertive adult, I became determined. If I was going to stick out, I might as well look damn good doing so. And with this, I was going to buy a suit.

At first, the process was discouraging.

I searched Boston for womxn’s suits. But none of the womxn models looked like me, and their suits failed to resemble the look I wanted: a look that meshed femininity with masculinity. A look that felt like my own. I considered men’s suit tailors but, based on their websites, it did not appear that they would style a womxn or even know what to do with my body type. Barbers in Boston have turned me away, or have given me a hack-job, five-minute cut on my short hair to get me out the door, making up excuses that really just amounted to me being a womxn. I was scared that I would walk into a tailor, feeling vulnerable and anxious, to only be turned away because of my sex.

I looked into sites online that seemed more promising, some run by fellow queer womxn aimed at bringing visibility and access to androgynous apparel, but it made me nervous to have such a hands-off experience, especially with a relatively hefty price tag. One day, a targeted Instagram ad appeared on my feed—and that’s how I learned about the Boston shop 9Tailors. The ad introduced their first-ever women’s collection. And for the first time, I saw a womxn like me clad in the suit of my dreams.

I was ecstatic…but still incredibly nervous upon entering a typically male-dominated arena. I’m not sure if it was the cool, calm and welcoming vibe or the whiskey I was offered at 11 a.m. but walking in, something told me that I had come to the right place. 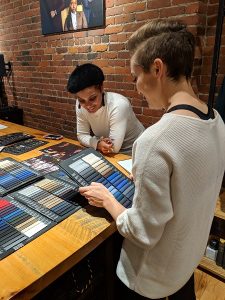 9Tailors is woman-owned and celebrated their 10-year anniversary in September. I worked with stylist, Stephanie Muñoz (Steph) who confirmed I’m not alone in feeling a bit overwhelmed when first embarking on this type of project. “The process can be overwhelming. It’s scary. You’re trusting somebody to design something from scratch for you that you’ve never had before. But I think when you are at 9Tailors and working with our stylists here, you get to be Vera Wang for the day. Let’s get excited.”

When asked how 9Tailors helps clients overcome these fears she said, “We make you feel comfortable. It’s getting to know our clients in the consultation process, really seeing how far I can push my client, how bold or how reserved they are, how specific their look is. Our job here is just to nurture that and guide them in making the right decisions for them.” This rang true for me. Every decision—from the slant of my pockets to the style of my lapels—was my own, but Steph helped me own my confidence and go for the “wow factor” with my suit. 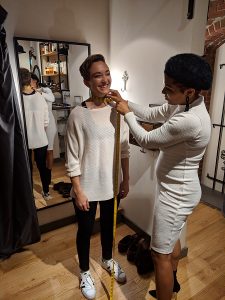 When asking Steph why she created the women’s collection, she said that she recognized the underserved demographics in a predominantly cis, male-driven market. And while 9Tailors has always done womxn’s suits, they needed a way to have womxn see something that relates to them. This led her to design the first womens’ design book along with a campaign called 9T Suits Me. The focus was, “We make suits for everybody and anybody,” showing the company’s desire to create custom suits across gender and differences, all shapes and sizes. Giving womxn across the spectrum the space to feel excited and empowered to stand out, strut in a power suit, and be themselves. As Steph would say, “It’s 2019, the rules have changed, and we are dominating.”

When I put my suit on, I was instantly reunited with my five-year-old self. Buttoning up my custom shirt, my fingers clasped around each of the pearly white buttons that I had personally picked out. And as I pushed my arms through the sleeves of my jacket, they zoomed past the inside lining of purple and gold paisley that matched the pocket square on my chest. I felt like a million bucks—and still do every time I put on my suit, made for me and me only. 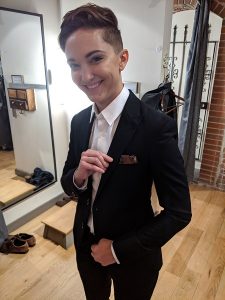 But not everyone gets to this final stage. Not everyone makes it into the door of a custom tailor, nor has everyone the financial means to do this. And when asked what she would say to those who had similar fears to the ones I originally had, Steph replied, “This is an investment. And I’m not one for upselling. So, when you’re doing this, I would rather you come here, get your consultation, see what we’re about. And then I’m going to send you off. Go search. Go see what’s out there. I would rather you come back confident.”

When asked why Steph loves working at 9Tailors, she responded with, “We have a solid team, an amazing, incredible team. We are all here for the success of 9Tailors which is the best part because we all believe in the brand. We have clients from professional athletes to ‘regular Joes’ and it all feels the exact same across the board. We would never make anybody feel more important than the other. Everyone is on the same level.”

I was able to walk into a space that was changing the rules of the game. I was given an opportunity to create a new choice in a society plagued with blues and pinks, mens’ and womens’ categories. I was able to authentically live by the Shonda Rhimes quote found on 9Tailors Instagram, “You can waste your life drawing lines, or you can live your life crossing them.” 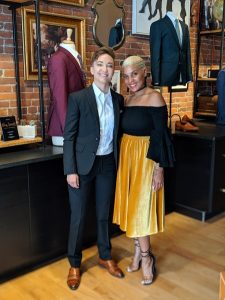 So, while I’m on a continual mission to bring more diversity, equity and inclusion to organizations around the world, I commend 9Tailors and Steph on their mission to create a space for people like me. Steph says it best: “As a strong, independent woman, I am just trying to change the world, one power suit at a time.”

The term womxn is a more inclusive and intersectional way to include trans-womxn, non-binary womxn and womxn of color.

To learn more about 9Tailors, visit them at 9Tailors.com.

Alex Suggs is a senior consultant at IBIS Consulting Group.