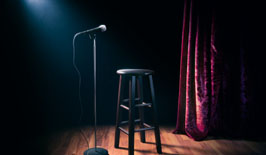 Can We Really Use Comedy to Talk About Diversity, Equity, and Inclusion in Organizations?

Is stand-up comedy a bold format for a conversation on diversity, equity, and inclusion? Yes, and that’s exactly why IBIS Principal Shilpa Pherwani is excited to launch this offering. “As part of our commitment to find the most creative and effective ways to advance DEI in organizations, IBIS is open to using anything from technology to actors and performers to help take diversity dialogue to the next level. Stand Up for Diversity! is our latest method of creating a shared experience that can create a safe space to explore complex diversity dilemmas through humor.”

At the Conference Board on June 4, IBIS presents its new offering Stand Up for Diversity!, a session that begins with a 15-minute comedy and storytelling routine by IBIS Senior Consultant, Tissa Hami.

“I always ask: how do we create that safe environment where people can be relaxed and not defensive? We don’t want them to roll their eyes when asked to participate in a diversity session,” says Pherwani. “Adding the element of humor and storytelling helps make the trainings more effective.”

Enter Tissa Hami. A former Wall Streeter and Ivy League graduate, she was not the obvious choice for a career in comedy. “My mother is a dentist. My father is a software engineer with a Ph.D. I thought I would get a doctorate-level degree too. But friends and colleagues would always tell me that I’m so funny and ask why I wasn’t doing stand-up comedy.”

As an immigrant from Iran and a moderate Muslim, Hami said she felt the call to speak up and speak out after 9/11. “I saw stand-up comedy as a way to be an activist, as a way to get through to people that’s different from the usual activism. Comedy allows people to let their guard down. And I wanted to give a different image of being a Muslim woman. I’m not a terrorist and I’m not voiceless.”

Hami started performing in small comedy clubs, and soon she was booking gigs all over the country. In 12 years, she did over 400 shows in 25 states.

“It was a career I never expected but it was great,” Hami says.

Eventually, Hami wanted a more stable career, so she joined IBIS, which gave her a vehicle to express both her comedic side and her overachiever side. “I wanted to use my entire background in my work. And one of my superpowers is that I’m very approachable. People tell me their stories all the time, even when I’m sitting on a park bench minding my own business.”

This superpower serves her well in organizations when she delivers Stand Up for Diversity! Within a 15-minute set, Hami gets audiences laughing as she tells real stories from her life as a woman of color in the workforce. Afterward, through a facilitated discussion, audience members share their stories.

“Even though these experiences are mine, what I’ve found is that they’re universal. One of the stories that resonates a lot is a simple one about business travel. I talk about a time that I walked into a hotel, and the people behind the reception desk just didn’t know how to greet me. They saw me, and I could tell that they were trying to figure out: Is she a guest? Is she here for a housekeeping interview? I heard how they greeted the man in front of me and I saw how they treated me. That sort of thing happens almost daily in my life, and a lot of women of color identify with that story. They will sometimes share similar experiences of their own.”

“The power of the comedy modality is such that people will connect with it,” says Pherwani, who brought Hami on in 2018. “We need to have more in-depth dialogues, but in DEI trainings, people are so politically correct, it blocks real progress. This format makes open dialogue easier and helps participants get to the things that need to be discussed if organizations truly want to make progress on their DEI goals.”

Last year at the Conference Board, IBIS brought its team of professional actors to perform sample scenarios from the workplace. These interactive theater scenes served as starting points for difficult conversations on DEI, leadership, and allies in the workplace. Low efficacy, Pherwani found, often happens because trainings are not customized for the organization and do not address real-life systemic issues. Theater, comedy, and storytelling that focus on diversity dilemmas are creative modalities that set the stage for actions and strategies to build equitable and inclusive organizations.

Stand Up for Diversity! is offered as part of workshops on unconscious bias, allyship, and other DEI training topics. For organizations committed to transformational change, it can be a catalyst that propels your DEI journey forward.