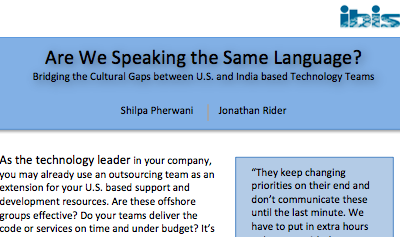 Are We Speaking the Same Language? Bridging the cultural gaps between U.S. and India based technology teams

“They keep changing priorities on their end and don’t communicate these until the last minute. We have to put in extra hours to keep up with the changes.”
The India Team

As the technology leader in your company, you may already use an outsourcing team as an extension for your U.S. based support and development resources. Are these offshore groups effective? Do your teams deliver the code or services on time and under budget? It’s a difficult thing to explain to your CFO that you are saving expenses by reducing headcount costs here in the U.S., but the result of that reduced cost is to extend programs and reduce the amount of systems and support development from your offshore teams.

Where is that ROI?

Gartner, the information technology research firm, identified India as one of the leading offshoring services destinations. So what does this mean for the U.S. worker who has to communicate with offshore teams based in India to get the job done on time? We can laugh at the NBC series “Outsourced” and imagine the even greater magnitude of the challenges when most of the communication is remote with teams working on the other side of the world.

Answering to the business why there is a “rift” in IT and why their project is over-budget and late is no laughing matter. The technology leads, project managers and developers who have to deal with this on an ongoing basis fail to see the humor in the often fraught interactions between U.S. and India teams.

Here are how some people on the U.S. side talk about their experience (recognize any?):

Now, let’s hear what the counterparts in India have to say about their experience working with U.S. team members:

“The India team is very hard working but I feel they don’t have the same sense of urgency. The deadlines are sometimes missed and what’s worse is that we don’t get any information until the last minute.”
The U.S. Team

Despite all the challenges outlined above, many teams manage to work together and, over several years, develop ways to collaborate effectively. Imagine the benefits if these challenges could be addressed earlier and more knowledgeably.

We need to take another look at our approach.

At a high-level, we can break these cultural and communication areas down into five major cultural differences between U.S. and India team members, and apply new tactics to bridge the gap; with this, the frustration and mistrust between teams can be significantly reduced.

An Indian employee talking with a project manager in U.S. says, “We need expert advice from the U.S. team to resolve some coding issues that our team is facing.” The U.S. project lead is a little confused by the request and asks: “Will it be helpful if I ask the technical consultant to get in touch with you?” The Indian employee responds, “Ummm, yes.” The project manager in the U.S. learns after a few days that the team in India was actually looking for user guide documentation and was embarrassed to ask for it directly!

Without stereotyping people, we can make the broad generalization that a lot of Indian team members tend to have a more indirect style of communication. A “yes” could mean a “yes”, “no” or “maybe” based on the context and also what impact the message would have on the receiver. For most Indians, relationships are key and they believe in order to avoid any tensions in these relationships it is best to say what you think the other person would like to hear!

Here are a few strategies to help the U.S. team bridge the gap:

Here are a few strategies to help the India team bridge the gap:

On the Indian side, most people view time as a cyclical process. Time is something that you don’t have total control of. In the social settings, it is acceptable to show-up two hours late! In the workplace, deadlines are viewed as somewhat flexible if other priorities arise.

Now contrast this with the U.S. side, where deadlines and schedules are seen as critical and need to be strictly adhered to in the workplace and even in social settings.

Let’s consider a few strategies to address the challenges related to different orientation towards time. For the U.S. team:

Now on the Indian side:

Subordinates in India consider it rude to openly question managers or contradict their opinions.

Subordinates in India consider it rude to openly question managers or contradict their opinions. For all the U.S. managers who wonder why folks in India do not push back or openly ask questions, remember, for most people in India doing something like that would be rude and disrespectful.

On the relatively more egalitarian U.S. side, it is often ok to push back on your manager unless it puts your job in jeopardy. When given project requirements, people are more comfortable openly questioning if they think there is a problem with the approach.

So, what can the U.S. managers do in this case to be more effective?

And, for the India team

[In the U.S.] … Handling conflict head-on is often considered healthier — even though it may result in disruption of relationships.

From the Indian perspective, harmony is a key value. The culture is based in family and community and anything that disrupts group harmony is not welcomed. Silence is preferred over open disagreement. On the same note, coming across as negligent or not knowing the answer to a legitimate question asked by a colleague or boss is considered “losing face.”

A U.S. manager may ask candid questions to an Indian project manager such as “are you confident that the project will be finished on time?” To this, he may receive a long-winded answer which throws absolutely no light on the timeline. This often is an indication that their Indian counterpart is not directly saying that there may be issues with the timeline in order to avoid conflict. He or she may also not want to “lose face” by seeming unsure.

Let’s look at the flip side here. The concept of “saving face” does not really exist for the U.S. culture. Handling conflict head-on is often considered healthier — even though it may result in disruption of relationships.

Again, what can U.S. team members do about the different orientation toward conflict?

What about the Indian team?

Companies that have been in India for several years have learned the trick of coming up with creative new titles to motivate employees. Status, and how it is perceived by family and friends, is very important for team members in India. The difference between a “Developer” and a “Senior Developer” is huge and really motivates Indian employees.

Have their friends heard about the company they work for? Is the company brand image prestigious enough to impress the new in-laws? This is important to many Indian employees. However, while titles and brand image are important, what ultimately results in Indian employees staying on with an employer is challenging, meaningful work that provides personal and professional growth. Employees in India detest the feeling of being “a backend office” and would like to be included in key decisions and strategy especially if it impacts their work.

In the U.S., motivation is mostly grounded on individual aspirations with less consideration to the expectations of family and friends

For the Indian employees,

Awareness about these cultural differences is a must on both sides. Only by recognizing these major cultural gaps will teams be able to meet at a common ground. Neither the U.S. way nor the Indian way is better than the other, it is just different. Recognizing this will allow you to deliver more, with less expense, and help you avoid that trip to the CFO’s office.